Last week the Museum of the City of New York inaugurated an exhibit on the storied Green-Wood Cemetery in Brooklyn. Entitled “A Beautiful Way to Go,” the exhibit is relatively small in relation to the sheer size, beauty, and historical

importance of the cemetery, but it uses the space beautifully and imaginatively, as one has come to expect from the Museum of the City of New York and the curator for this exhibit, Donald Albrecht, whose staff was aided by Jeffery Richman, the cemetery’s historian.

When I served as a consultant three years ago to the New York Historical Society’s exhibit on the history of the Latin American presence in the city (Nueva York!), I came to appreciate the challenging zero-sum game of exhibit planning: the available space sets a tyrannical limit. If you decide to add something, something else must come out.

Imagine the challenge in the Green-Wood exhibit. You want to cover the history, the architecture, the landscaping, but most importantly, you have to answer the question: who is buried there? Anybody we know? The answer is YES: Samuel Morse, Boss Tweed, Leonard Bernstein, John Underwood (the

typewriter guy), the Steinways (the piano guys), the Havemeyers (the Brooklyn sugar refiners), James Weldon Johnson, Horace Greeley, Jean Michel Basquiat, Henry Chadwick and Charles Ebbets (both of baseball fame), the Rev. Henry Ward Beecher, Juan Trippe (PanAm founder), the musician Louis Gottschalk, Susan Smith McKinney (first African-American woman to practice medicine in New York State), the guy who played the actual Wizard of Oz in the 1939 movie, Thomas Adams (the inventor of the chewing gum), and, in my view, the man who most influenced the history of the city: Governor DeWitt Clinton. Oh, and by the way, more than half a million other people. The selection process for those who are showcased (literally) in the exhibit must have been brutal. Even Gottschalk, arguably the most renowned composer and musician of his time, did not make the cut (although the guy who wrote It’s Raining Men did).

So I understand (although I am disappointed) that not one of my dead Cubans, with whom I have been living with over the past decade or so as I research the history of Cubans in New York, made it to the exhibit. And there’s quite a few of them buried in Green-Wood, and fairly prominent ones at that.  In fact, I venture to say that Green-Wood is the cemetery outside of Cuba where the greatest number of notable Cubans is buried, with the possible exception of Woodlawn in Miami (two Cuban Presidents and at least one wanna-be Cuban President, among others, are buried in that Calle Ocho cemetery). But as far as 19th-century Cubans are concerned, I would argue for Green-Wood (Paris and Madrid are possible challengers).

Here then, is my supplement, or Cuban appendix, to the fine, although necessarily limited, MCNY exhibit.

But first: the context. Most of the notable Cubans buried at Green-Wood belong to the migration wave that arrived in New York in the aftermath of the outbreak, in 1868, of the first war of independence from Spain. That wave made Cuban New York the largest community of Latin American immigrants east of the Mississippi and remained so until Ybor City (another Cuban community, in Tampa) surpassed it in 1886. It was a migration spearheaded by the Havana elite, mostly owners of sugar plantations and slaves, as well as the lawyers and intellectuals associated with that class, who found themselves in physical danger when their eastern compatriots decided in 1868 that the political status of Cuba had to be decided by the sharp edge of a machete. The Spanish unleashed a wave of repression against the Havana criollo aristocracy, so they exiled themselves in New York, where most of them had been selling their sugar for decades and where they had sizable accounts with the counting houses lining South Street. Here they joined forces with longtime Cuban residents of the city to support, with widely ranging degrees of enthusiasm, the cause of the rebels fighting the Spanish in Cuba.

Even before the outbreak of the war, Green-Wood had become a well-known place for Cuban New Yorkers. One of the most important Cuban poets of all time, Juan Clemente Zenea, who first arrived in the city 1852, visited Green-Wood and penned a poem En Greenwood, which starts: “next to these quiet waters/among these woods, in this refuge/under these lawns and roses/is where I want to peacefully rest.”

Miguel Aldama, the most prominent of all the Cuban sugar planters, the informal leader of the Havana elite, and perhaps once the richest man in the island, is buried at Green-Wood. He gained prominence in New York as the official representative in the United States of the Cuban rebels, and although his properties in Cuba were embargoed

Miguel Aldama, on the cover of Harper’s Weekly

by the Spanish, he had stashed away in New York nearly one million dollars, which enabled him to live very comfortably in the city, give his daughter a sumptuous wedding and a European honeymoon, erect a huge sugar refinery in the Brooklyn waterfront, and build a relatively modest mausoleum in Green-Wood to bury his father, Domingo, and his wife, Hilaria Fonts, both of whom died within a few years after arriving here. Aldama was on a first-name basis with most of the city’s rich and powerful, including mayor Oakey Hall.

Eventually, both the war and the refinery failed, and Aldama was forced to return to Cuba to try to recover (unsuccessfully) his properties from the Spanish. When he died virtually penniless in Havana in 1888, his body, in accordance with his wishes, was shipped to New York and buried in Green-Wood. All the New York newspapers covered the arrival of the body and its burial.

Also buried at Green-Wood is a colleague of Aldama, José Morales Lemus, a prominent lawyer for the Havana planter class, who was the rebels’ representative prior to Aldama and who devoted himself to an unsuccessful campaign to get the Grant administration to recognize the legitimacy of the cause for Cuban independence. He was practically a fixture in the office of Secretary of State Hamilton Fish. Already an older man when he arrived, he died of a gastrointestinal ailment in his Brooklyn home in 1870.

There are three large and prominent families from that migration wave buried at Green-Wood. All three arrived here with money, but made a fortune investing in Manhattan real estate. The Govíns, headed by Félix, owned some twenty-six multifamily rental properties in what is now Hell’s Kitchen and Félix was probably the richest Cuban in New York in the 1880s. His daughter, Luciana, inherited most of the family fortune and she provided the critical financing for the expedition José Martí organized in 1895 after the Fernandina fiasco (see Cuban New Yorker blog #16, February 4, 2013).

The Angarica brothers, José and Joaquín, also had substantial Manhattan real estate holdings, but were better known as very high-ranking Freemasons, establishing and leading an important lodge in Manhattan.

Years before the conflict, the Mora clan had already established a presence in the city as sugar merchants, selling their sugar to New York refineries and investing in income-producing property in the East Village. José Mora was a generous contributor to the Cuban cause, losing much of his fortune in the conflict. José also lost a brother-in-law, the husband of his sister Carlota, General Domingo Goicouría, who was famously and publicly executed by the Spanish in Havana during the war.

A second-generation Mora, José María, established a photography studio on Broadway, eventually becoming a prominent theatrical photographer. In his last years he lived as an eccentric recluse and his death was covered by the major New York newspapers.

Benjamín Guerra, a collaborator of Martí and the treasurer of the Partido Revolucionario Cubano, who died in New York in 1900, has one of the most modest tombs in the cemetery. There are undoubtedly many other Cubans interred in Green-Wood. It is difficult to know without much more exhaustive research because the searchable burial records are not complete. I have a long list of Cuban New Yorkers who died in the city, but I have yet to determine where they are buried.

The body of Zenea, the poet who loved Green-Wood and wished to be buried there, is not in the cemetery. In 1870 he was sent to Cuba by Aldama, allegedly to meet with the rebels and communicate a Spanish peace offer. Despite having a “safe passage” document issued by Madrid’s ambassador in Washington, he was imprisoned by the Spanish authorities and held in La Cabaña fortress in Havana, where he was eventually executed. 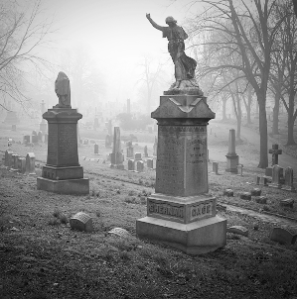 Every New Yorker has a story. The stories of some are deemed more important than the stories of others, but that is a matter of perspective. These stories are important to me because they are the stories of people who were born where I was born and who lived in the same city where I now live. Many are untold stories. Since I started researching their lives, these dead Cubans have been coming at me out of archives, records, and old newspapers, clamoring to have their New York stories told, especially since their stories are not usually found in the history books, historical markers, or exhibits about the city.

A parting note to the Museum of the City of New York: thank you for the exhibit, it is wonderful and I thoroughly enjoyed it. If by any chance you are thinking about an exhibit on Woodlawn Cemetery in the Bronx, give me a call, I have a couple of dead Cubans for you.