It’s been a long winter, intruding on Spring. And the semester has been more than busy. So Liza and I started Spring Break early, rented a car, and sought out the landscapes of the Hudson Valley, favorites of ours, just for a change. We did not stay overnight, but the car was not due back until the following day at noon.

So what can we do in just one morning with a car in the city? Escape the city for breakfast. And I mean escape the brunch plague. Yes, New York City has thousands upon thousands of restaurants, but it seems all of them, at least in Manhattan and parts of Brooklyn, have one menu on weekend mornings: some

variation of Eggs Benedict, waffles, pancakes, and your choice of a Mimosa or Bloody Mary. Oh, and if you happen to wake up early (as I do), you have to wait until about 11:00 a.m. to make your selection. I like to have breakfast when I wake up, and by midday I’m ready for a real meal, not eggs on English muffins or something covered in syrup.

With a car, the choice is clear. Burrow into the Lincoln Tunnel and come out in Union City hoping for a breakfast we have not had this long winter: a Cuban breakfast. You know what I’m talking about: café con leche, tostada cubana (buttered, crisp, well pressed), and huevos fritos (not runny, with that whitish layer on the yolks that you get by splashing the cooking oil on top while you fry them). We were also hoping for a side of either chorizo, or even better, croqueticas de jamón.

In an earlier post, I asked readers of Cuban New Yorker if there are any Cuban places in New York that serve cafeteria fare, because that’s what you are looking for when you go out for a Cuban breakfast. No one suggested a place in the city. So I went online: “Cuban cafeterias in Union City, NJ.” I was referred to Cuban restaurants in Union City. I scanned through the results and saw one with the name “Latin American Restaurant,” evocative of the cafeteria in Miami with the same name. And it opens at 9:00 a.m. every day. That’s what I’m talking about.

Since I do not usually have a car in New York, I do not, regretfully, get out to Cubanland in Jersey I often as I would like. So I had to depend on the GPS to direct me to 4317 Bergenline Avenue. But the expedition was worth it, as I realized as soon as I drove up to the place. There were signs on the restaurant’s exterior advertising its offerings, including pan con bistec, sandwich cubano, 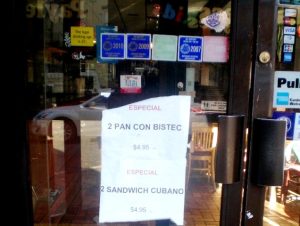 and, most importantly, desayuno completo, that is, cafeteria fare.  As it turned out, we could get both chorizo and croqueticas. The croqueticas were atypically slender, but they were homemade, fried to order, and light and crispy. The eggs were perfect, as were the café con leche and the tostada.

That morning the restaurant was a one-woman operation: waitress, cook, and cashier all in one, which was not a problem since the place was not exactly crowded at 9:00 a.m. (where did everyone go, to Manhattan for brunch?).  I did

not ask her name since she was initially a bit leery of us when she saw me taking pictures of the restaurant’s exterior. [Maybe sizing up someone’s place of business is not a good thing to do in Tony Soprano’s

territory].  But after we started talking she told us she had arrived in Union City (and the U.S.) three years ago, after leaving Cuba through Mexico.

U.S. Census data show that the Cuban presence in Union City is declining, in both relative and absolute terms. The 2000 Census counted 10,296 persons of Cuban-origin or descent, the largest single Latino-origin group in Union City, but that was already a dwindling number in comparison to the 1970’s and 80’s. The most recent census (2010) found 7,510 persons claiming Cuban origin or descent, with Dominicans now the largest single Latino-origin group in the city (10,020).

The figures also show that Union City remains a first-generation (immigrant) community for Cubans. Even as the numbers decline, Cuban-born persons continue to predominate among all persons of Cuban origin. In other words, the children of Cuban immigrants move out of Union City, with new arrivals from Cuba (the preparer of our fine breakfast is an example) replacing them. But they are not fully replacing them, since new immigrants from the island are likely to go to Florida, and so the community in Union City declines.

But Union City, and especially Bergenline Avenue, continues to bear the mark of what has been a premier community for Cubans in the U.S.  Fortunately, ethnic communities tend to outlive the immigrant generation, at least in terms of businesses catering to the group’s traditional consumption patterns, as evidenced by Little Italys everywhere and even Ybor City in Tampa. I hope so. I plan to go back to Union City for breakfast.