Cubans as the Exotic “Other”: ¡CUBA! at the American Museum of Natural History

I do not tend to frequent Natural History museums, and when I do I am usually selective in what I view. As a social scientist, I predictably favor the anthropological exhibits. At the American Museum of Natural History (AMNH) on Central Park West my favorite is the permanent exhibit devoted to the indigenous peoples of the Pacific Northwest, especially the Kwakiutls.

I love their totem poles and masks. And that potlatch stuff is so utterly unlike anything we practice in modern societies. I am not as keen on the stuffed animals in the dioramas that abound in the AMNH. And even the huge whale fails to impress me. Forget about the assembled dinosaur skeletons. Maybe I am just not an animal person.

My recent visit to the Museum’s temporary exhibit, ¡CUBA! upended those preferences. The exhibit  was developed in collaboration with the Cuban National Museum of Natural History and as such it is a triumph for Cuba-U.S. scientific and academic collaboration. It opened this past November 21 and runs through August 13 of this year. It is on the third floor, just beyond the permanent reptile exhibit.

I found myself enthralled by the animals and underwhelmed by the culture. That is not, of course, the fault of the curators, who have put together here an extraordinary exhibit, visually striking, readily accessible, and packed with information.

No, it’s me.  After all, I already know what are guarapo,  croqueta, and ajiaco, that Cubans play dominoes with a double-nine set, that baseball is a serious passion and that there are sixteen Cuban teams.

I know about La Virgen de la Caridad del Cobre and that beliefs and practices of African origin occupy a critical place in the Cuban religious landscape. I am also painfully aware that in Cuba (as in New York) there are bici-taxis (I know, they are examples of entrepreneurship, but of the lowest, most exploitative kind). Yes, there are also fruits carts in Havana (and in most of the world).  I’ve even been in a real leaf tobacco drying house like the one reconstructed in the exhibit in painstaking detail, except that the Museum one is odorless, totally devoid of the pungent smell my subconscious was expecting when I walked into it.

But more than just ho-hum familiarity made me regard the anthropological side of the exhibit with a mild displeasure. It was strange to see the culture that I grew up with, the foundation of my sociocultural self, treated as exotic.

Cubans as the exotic “other.” Cubans as Kwakiutls. 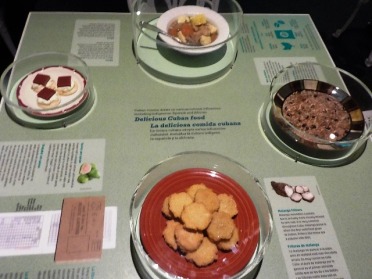 Exhibit visitors gazing with interest at a plastic model of a fritura de malanga, marveling at the combination of a slice of guayaba paste with cream cheese on a cracker. A plate of moros. Imagine. What an exotic world.

Again, I mean no criticism of the exhibit, which is very well done, and I recommend that everyone go to see it. I am just describing how I saw ¡CUBA! through my lens, aware, of course, that I am no doubt quite outside the profile of the target audience.

But let’s talk about the animals, the unexpected, to me, gems of the exhibit. They are there either stuffed or rendered in outstanding replicas. There are even live small reptiles. If you are ethnocentric and believe in Cuban exceptionalism (and what dyed-in-the-linen Cuban does not), this exhibit will puff up your chest like nothing else. These animals are unique to the island and in some cases the ____est in the WHOLE WORLD.

Take the long extinct Cuban giant owl, nearly four feet high, which mostly walked, but had it flown (and we don’t know if it did or not) it would have been the LARGEST flying bird to have ever existed, anywhere. And what about the Bee Hummingbird or Zunzuncito, found only in Cuba, the SMALLEST living bird in the whole world?

A stuffed Jutía Conga is also there, billed as the largest endemic mammal in Cuba, weighing in at about fifteen pounds. Even larger was the extinct magalocdus rodens, a giant sloth unique to Cuba that is billed as the strangest animal to have roamed (slowly, we assume) the island millions of years ago. Its skeleton is on display. A Cuban sloth. Hmm . . . I’ve met a few of those, but not many.

There are replicas of the extinct and unique Cuban Monkey and Cuban Parrot, and, of course, the emblematic Cuban Crocodile, which is still around. A once thought extinct, but newly discovered, species is perhaps the strangest of all, the Soledonon Cubanus, or Almiquí, weighing in at only two pounds but even so the LARGEST of the family of shrews and hedgehogs. It has a reptile-like feature: it secrets venomous saliva through a groove in its front teeth. A Cuban species that spews venom. (Hmm . . .no, I won’t go there).

There are other segments of the exhibit that are also imaginative and well done. Upon entering it, the visitor walks through a series of vertical banners with quotes by Cubans living inside and outside the island sharing their thoughts on the Cuban condition, including one by my friend and neighbor, Marilú Menéndez. Jorge Segrea Recio, a butcher from the town of Camilo Cienfuegos (formerly Hershey), is quoted as saying: “We can be in any part of the world, but we always have present in our minds the piece of earth where we were born. A Cuban will always tell you: ‘I am Cuban’.”

The next gallery has the obligatory 1950’s Chevy, beautifully restored. The visitor then enters a small theater that shows on a continuous loop a bilingual ten-minute video summarizing the entire sweep of Cuban history. One would expect something rather cursory and superficial, but the video hits all the necessary points within the severe time constraints. Julia Sweig served as the consultant.

There is only one minor error: when the narrator mentions José Martí’s death in combat, up pops a picture of José Martí Zayas-Bazán, Martí’s son, in his uniform as an officer in the army of the Cuban Republic.

I left the exhibit in a reflective mood, pondering how it has come to pass that everything Cuban has acquired this aura of the exotic, or, to use the title of a recent book on an unrelated topic: The Glamour of Strangeness. Would it be possible to conceive of such an exhibit in that other parallel path of history, the one in which relations remain unbroken and normal between the U.S. and Cuba? That parallel history in which every day for the past 57 years planes and ships transited between New York and Miami and Cuba, as they once did, with people who travel freely; a world in which Cuba is thoroughly familiar to Americans, a world that is not forbidden, without throwbacks to the past, without the evident architectural and automotive relics, a place that looks and feels as if it has kept pace with the rest of the world, a place, in short, not frozen in time, not a forbidden destination experienced by only a select few. No, this exhibit can only be understood in the context of Cuba’s extraordinary and even bizarre history over the past six decades, a history that has placed Cuba in the realm of the exotic, giving it the patina of strangeness, of being thoroughly foreign. Like the Kwakiutls.

7 responses to “Cubans as the Exotic “Other”: ¡CUBA! at the American Museum of Natural History”