Manhattanites have traditionally regarded the “outer boroughs” in the same condescending way habaneros talk about “en provincia, “ or what used to be called in Cuba “el interior,” that is, the rest of the world out there beyond the center of the universe.  It is clear, however, that in recent years Brooklyn (or at least parts of it), has become “cool” enough to escape provincial status and be touted as part of the known New York world.  That much is evident on any given

weekend evening as the Brooklyn-bound L train disgorges scores of “hip” young people at the Bedford Avenue stop for an evening in Williamsburg.

Williamsburg has acquired a particular appeal because it is probably the one “cool” place in Brooklyn where you are not in danger of being run over by a stroller. Park Slope, Carroll Gardens, and the like have acquired a reputation for “hip young families.” But in Williamsburg the vibe is more like an edgy version of the Meatpacking District scene in Manhattan: young single people out for a good time.

Liza and I went to Williamsburg recently in search of a Cuban restaurant we had seen on a Sunday last summer on our way to the Williamsburg Flea Market. We had forgotten the name of it, but nevertheless managed to locate it on North 6th Street, between Whythe and Kent Avenues, a couple of blocks from the Bedford 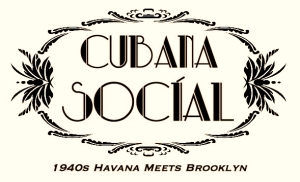 Avenue station. It has a puzzling name: Cubana Socíal. Hmmm . . . what’s up with that accent on the i? And in what way do cubana and social combine to form a meaningful term? A sociable Cuban female person?  The friendly skies of the Cuban national airline? There must be a story behind the name that I am missing. Or maybe not. Maybe it is simply meant to be evocative in a meaningless way.

The restaurant bills itself as “1940s Havana Meets Brooklyn,” and that is indeed what makes this place intriguing. It’s more about the ambience than the food, although the food is good enough.  The ambience actually does not start at the door of the restaurant, but in the neighborhood itself. The success of the restaurant’s interior design is that it is a continuation of the atmosphere of the neighborhood. There is something peculiarly Havanesque about Williamsburg.

The elements are all there. Williamsburg is an area transitioning from 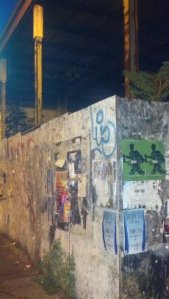 warehouses, factories, and industrial shops to a cool chic based precisely upon the omnipresence, and transformation, of the ruins of the past. There are shuttered and dilapidated spaces everywhere, with some of those spaces converted to restaurants, bars, and stores that are interspersed among, and even integrated with, the ruins. Last month, The New York Times reported that an arts group called The Original Music Workshop is holding avant-garde artistic performances in the open air inside the weathered shell of a former factory. The picture in the Times could have been taken right out of a report from Havana on the city’s culture and arts spaces. Art among the ruins.

A performance designed by the artist Erika Harrsch, with butterfly-shaped kites, was among the acts at Original Music Workshop in Williamsburg. Photo by Marcus Yam for The New York Times.

As with Havana, the Williamsburg that straddles Bedford Avenue retains (so far) the ambience and decayed structures of its past.  Retaining that past gives the

place an unmistakable grittiness, a pervasive unkemptness that has been lost in the now impeccable neighborhoods that have completed the transition to gentrification. There are the broken and patchy (even dangerous) sidewalks, the boarded-up factories and shops, the peeling paint, and the vacant lots overgrown with weeds. And another thing: the quality of the light. In a factory and warehouse district where everyone went home at night, there was a minimal investment  in street lighting (as has happened in Havana, where the urban infrastructure has not been a priority). Liza noticed it first: Williamsburg at night has a dimness evocative of Havana. 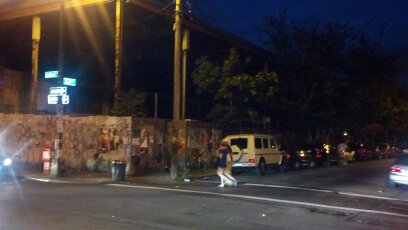 cavernous, probably a former auto repair or body shop or perhaps a factory, with a very high ceiling, square brick columns throughout, and cement floor. Not much has been done to transform it into a restaurant, except for a magnificent bar and an art deco front with a weathered industrial look to give the appearance that it has always been there (or in Havana). Compared to the bar, contemporary in its style, the tables and chairs (some of them rickety or foldable) seem to be almost an afterthought, a mishmash of styles cobbled together from the nearby flea market. But it is actually part of an evidently conscious effort to emulate the grittiness of old Havana, a paladar set in a space that used to be something else, complete with peeling paint.

The art deco style is replicated on the walls by several prints by Conrado Massaguer (1889-1965), no doubt reproduced from illustrations of his fiercely art deco magazine Social (no accent). [Massaguer, who lived in New York for part of his life, deserves a separate future post in CNY].

There is another way Cubana Socíal tries to evoke Havana: the attempt at creating a surreal ambience [I wonder if it is really true, as legend holds, that Sartre, as he was leaving Cuba after his only visit there in 1960, with Simone de Beauvoir at his side and his coat draped over his shoulders, said: “One could not live here, it is too surreal.”]

Cubana Socíal has a whiff of Cuban surrealism. The space is so huge that there are large empty spaces without tables, a strange expansiveness rare among space-starved New York restaurants. On a huge wall the restaurant continually shows black and white American movies, with no sound and for no evident reason nor connection with the Cuban theme.

When we were there they were showing a noir movie, with vaguely familiar but unnamable actors, apparently about a returning soldier with an overacted case of post-traumatic stress disorder acquired after being imprisoned in a camp run by sadistic Asian soldiers in Mao suits. Who knows . . . maybe the Cold War connection. All of this while El Benny can be heard singing Maracaibo Oriental. What would Sartre say?

Oh yes . . . the food. Reflecting the investment in the bar and not the dining area, Cubana Socíal’s drink menu is about as large as the food menu. There are

several varieties of rum concoctions, but also a lot of other choices (a good thing, since I must confess here and now that, as is true of most Cubans when given a choice, I’ll take whiskey over rum any day). The main food offerings are few and simple, one dish per protein source: lechón asado, ropa vieja, shrimp and rice, some sort of chicken, and a vegetarian option, most served with white rice and black beans. There are appetizers and sides and sandwiches. Liza ordered the ropa vieja and I went for the lechón, which was curiously served not in chunks, but shredded, like vaca frita. We ordered, of course, a side of maduros.

The servings are also kept simple. Unlike most Cuban restaurants, where the huge quantities of food come in separate plates, everything came in one overflowing plate in the style of Chinese combination dinners or the old “blue-plate specials.”  The servings are on the modest side, but so are the prices. The food was good and authentic and the deal breaker (for me) was there: well-done maduros, amelcochados. Liza and I shared a flan, which was rich and caramel-y.

So, yes, grab the L and go out there. Take in the food and, especially, the ambience, which kicks in as soon as you exit the station. It’s an ambience that is changing, no doubt faster than in Havana. 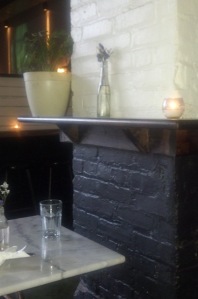